by Asha Afroz
in Tech
0

Buying the best SSD for Mac and external hard drives in 2021 for your Mac is not all that different from buying one for your Windows PC, except for one very important complication: The latest Mac laptops only come with Thunderbolt 3 ports, but the arrival of Thunderbolt 3-equipped drives has been a trickle, rather than a flood. Most of the current models that use the Apple-friendly interface are designed for photographers and video editors who need to store mountains of footage and access it very quickly. As a result, they are typically external SSDs, or multidrive RAID arrays, which means they’re also very expensive.

So what’s a Mac user to do who just wants to back up his or her files using Time Machine, or stash a large video collection? Read on as we solve this and all of your other Mac external-storage quandaries.

The best SSD for Mac

Before we get to Thunderbolt 3, we need to address a basic building block of hard drives that has always affected compatibility, and probably always will: the file system.

An external drive’s file system is the most important factor that determines whether or not it’s readable by Macs, PCs, or both. With the release of the macOS High Sierra operating system, Cupertino ditched its venerable Mac OS Extended file system, commonly abbreviated as HFS+, and switched to an entirely new file system. It’s simply called the Apple File System (APFS), and it’s the first format to be used across both Macs and iOS devices.

The Best SSD for Mac and External Hard Drive Deals 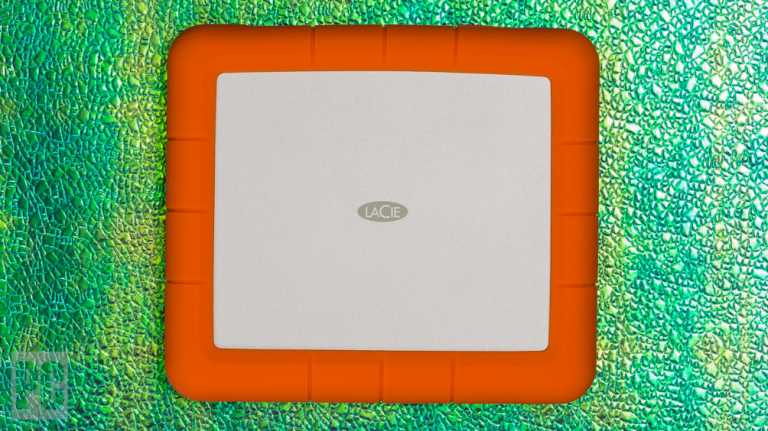 There are many benefits to switching from HFS+ to APFS, including better security thanks to native encryption, but the most important thing to note for external-drive shoppers is backward-compatibility. Any drive formatted with HFS+ will work just fine with a Mac that’s running macOS High Sierra or later.

Neither Apple File System nor HFS+ works with Windows, however. If you plan to use your external drive with computers that run both operating systems, you should consider formatting your drive with the exFAT file system. You won’t get the security and efficiency of APFS, but you will get the convenience of being able to transfer files back and forth between Windows and macOS simply by plugging in and unplugging your drive. 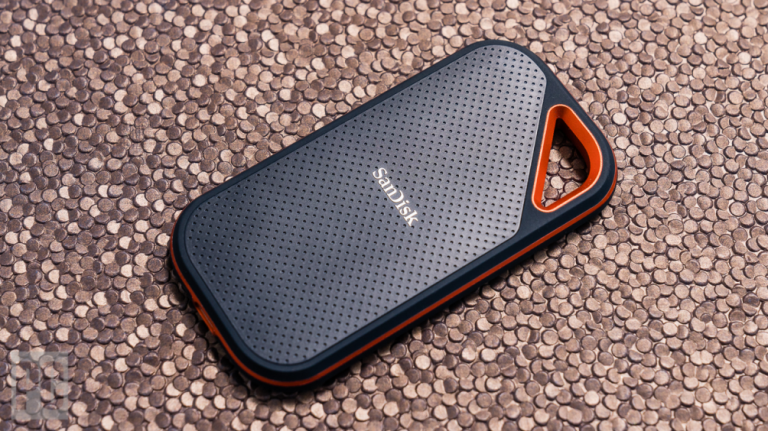 Of course, you can easily reformat most external drives, so you’re not limited to buying only those intended for use with Macs. If you really fancy a consumer-oriented drive formatted for Windows (which will usually pre-formatted in the NTFS format), you can use the Disk Utility in macOS to reformat it after you bring it home from the store. Some highly specialized external drives might not work with Macs even if they’re formatted correctly, but consumers looking for extra space simply to store backups or large video collections aren’t likely to encounter them.

Once you’ve settled on a file system, you then have to determine which storage medium you want: solid-state or spinning disk. Each has its advantages and disadvantages, and—unlike the file system—the type you buy is the type you’re stuck with for the life of the drive.

A solid-state drive (SSD) offers quick access to your data because it stores your bits in a type of flash memory rather than on spinning platters. The best SSD for Mac are often smaller and lighter than spinning external drives, as well, which is also thanks to the lack of moving parts. Their small size means they can often fit into a jacket or pants pocket, which makes them a better choice if you’re looking for a portable external drive that you’ll be carrying with you frequently. (See our overall picks for favorite external SSDs.) 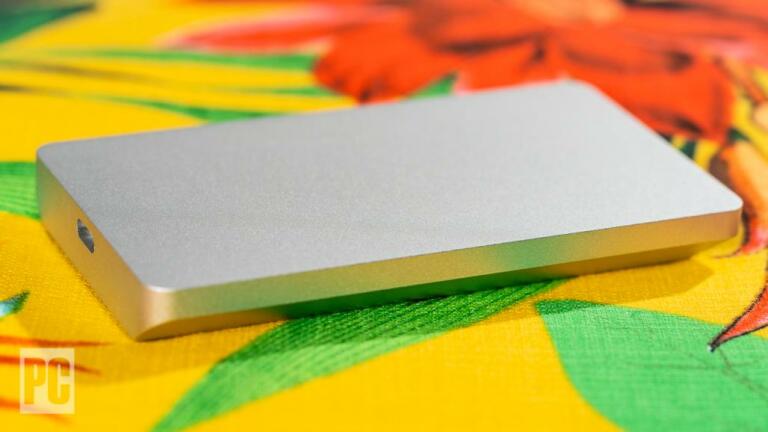 One major downside, however, is that they’re more expensive. You could pay more than 25 cents per gigabyte for an SSD, while spinning drives can be had for less than 10 cents per gigabyte—and often much less. External SSDs also have lower capacity limits, with most drives topping out at 2TB. Compare that with external spinning drives, which are easy to find even in capacities in excess of 8TB for desktop-style drives, or up to 5TB for portable ones.

For professional videographers who edit lots of 4K footage and gamers or movie buffs who have large libraries of multi-gigabyte titles, an external RAID array made up of multiple platter-based drives is worth considering, since it combines the near-speed of an best SSD for Mac with the gargantuan possible capacities of spinning drives. An array contains two or more drives that all work together to increase throughput, or guard your precious files against corruption via drive redundancy if one of the drives fail. (Or both; it depends on how the array is set up.) The result is that you can get best SSD for Mac-like speeds, with throughput of more than 400MBps, and capacities that top out close to 50TB. You’ll pay handsomely, of course—some Mac-specific arrays cost thousands of dollars.

On the other hand, if you’re looking to buy an external drive mainly to back up your files and it will rarely leave your home office, an inexpensive spinning drive will work just fine. These come in both portable and “desktop” versions.

The portables are obviously smaller, and are based on the kinds of 2.5-inch platter drives used in laptops. Desktop-style external hard drives are larger, are based on the beefier and more capacious 3.5-inch drives used in full-size desktop PCs, and require their own AC power source. Portable drives don’t have a power plug; they get the juice they need to run through their data interface.

Learn more:
Popular but Best and Cheapest smartwatches you may like

Does Thunderbolt 3 Matter, or Will USB-C Do?

So, to recap: Faster, smaller (both physically and in terms of gigabytes) solid-state drives come at a premium, while spinning drives offer a much better value while sacrificing speed. But what happens when you throw yet another variable into the mix: the connection between your drive and your Mac? As you might have guessed, the answer is more tradeoffs.

Every current Mac laptop comes with oval-shaped USB Type-C ports that support Thunderbolt 3, but other than a headphone jack, they are the only connectivity options available, which means you’ll need an adapter to plug in any device that doesn’t have a USB Type-C cable. The silver lining is that Thunderbolt 3 via USB Type-C supports a blazing maximum potential throughput of 40Gbps, double the speed of the old Thunderbolt 2 standard and many times the 5GBps that USB 3.0 offers. 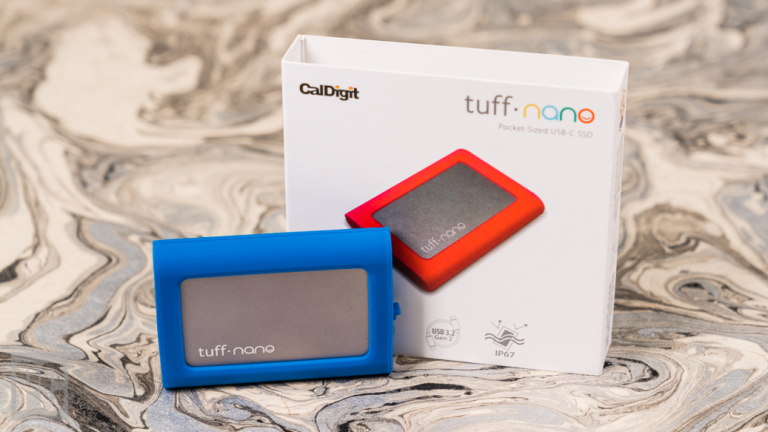 Unfortunately, you won’t find all that many Thunderbolt 3-compatible drives on the market. Even some Mac-specific drives are still sold with USB 3.0 connectors. Moreover, the Thunderbolt 3 drives you can buy are constrained by the maximum throughput of the drive itself, rather than the Thunderbolt 3 interface. Until recently, most external SSDs topped out at around 600MBps, for instance, due to the traditional bus types in that drives inside the chassis used. That’s more than fast enough for backups and occasionally transferring multi-gigabyte files, but many times lower than Thunderbolt 3’s maximum throughput.

However, that speed ceiling is rising. While older external SSDs have been limited by the internal electronics, late-model drives use different internal components, based on PCI Express drives using the NVMe protocol. These kinds of components in newer drives help Thunderbolt 3 reach more of its speed potential. Drives with rated peak reads and writes in the 1,000MBps to 3,500MBps range indicate one of these newer-tech drives. 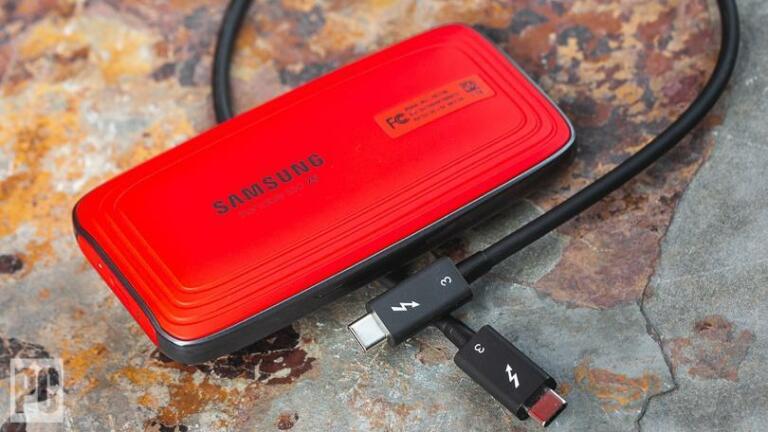 You can insist on Thunderbolt 3 support if you have a late-model Mac and you know you need all the speed you can get, but a USB-C drive will be a better pick if you’re more price sensitive, or need to also use the drive with a PC. With USB-only drives, some manufacturers include a USB Type-C cable for people who own a USB Type-C-only MacBook, and you can always pick up a converter for a few dollars online if the drive you’re eyeing doesn’t offer one. And Mac desktops all still come with USB 3.0 ports, so they won’t require adapters.

Drives intended for PCs sometimes come bundled with software that will automatically back up your files to the drive when it’s connected, but such software isn’t as much of a consideration for Mac users, who already have an excellent built-in backup option in the form of Time Machine. 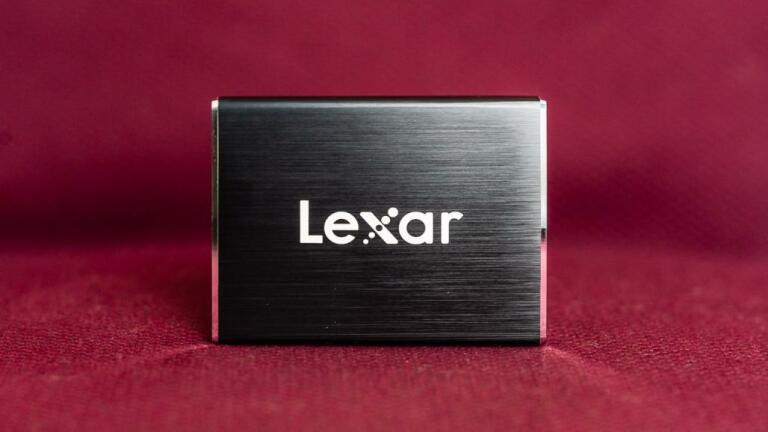 Unless your drive is never going to leave your home or office, you should also consider its physical durability. Rugged, waterproof drives are a good option not just for surfers and BMX riders, as their marketing seems to suggest, but also for people who are carrying their drives to and from school or work, where they might occasionally get spilled on or dropped on the floor.

Finally, you might want to consider how the drive will look when it’s plugged into your Mac. Some drives come in a variety of colors. Many others feature copious amounts of aluminum and industrial-chic styling to match the design cues of your MacBook or iMac.

No Result
View All Result